Brother Lawrence of the Resurrection 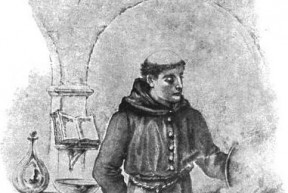 (Feast Day: January 11th)
Born Nicolas Herman in Lorraine, France, he lived from 1611-1691. At mid-life he entered a Discalced Carmelite monastery in Paris as a lay brother, where he became the cook for the community which grew to over one hundred members. After fifteen years, his duties were shifted to the sandal repair shop but, even then, he often returned to the busy kitchen to help out. In times as troubled as today, Brother Lawrence, discovered, then followed, a pure and uncomplicated way to walk continually in God’s presence. For some forty years, he lived and walked with Our Father at his side. Yet, through his own words, we learn that Brother Lawrence’s first ten years were full of severe trials and challenges. A gentle man of joyful spirit, Brother Lawrence shunned attention and the limelight, knowing that outside distraction “spoils all”. It was not until after his death that a few of his letters were collected. Joseph de Beaufort, counsel to the Paris archbishop, first published the letters in a small pamphlet. The following year, in a second publication which he titled, ‘The Practice of the Presence of God’, de Beaufort included, as introductory material, the content of four conversations he had with Brother Lawrence. In this small book, through letters and conversations, Brother Lawrence simply and beautifully explains how to continually walk with God – not from the head but from the heart. Brother Lawrence left the gift of a way of life available to anyone who seeks to know God’s peace and presence; that anyone, regardless of age or circumstance, can practice -anywhere, anytime. Brother Lawrence also left the gift of a direct approach to living in God’s presence that is as practical today as it was three hundred years ago.